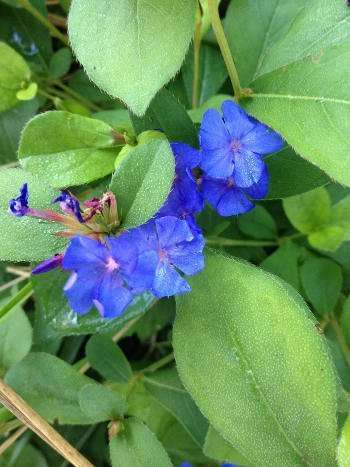 One plant that I really appreciate at the end of summer is the bright blue flowering plant sometimes known as plumbago, or leadwort, whose Latin name is Ceratostigma plumbaginoides. It has slowly grown on me, a plant that works as a ground cover, which shows up a bit late- making it ideal over spring blooming bulbs. I have grown it mainly in partial sun in the protection of shrubs and small trees, so it survived the winters without any trouble.

A rhizomatous, mat-forming groundcover, it grows 10-20 in. tall, and spreads 12-18 in. Leaves turn a bronze to red color after frosty weather to accentuate the striking blue flowers in terminal clusters which show from July through autumn. The intense blue of the flowers are what makes this plant so attractive. I have combined it with Mertensia, Virginia bluebells, which show up early in the season and then disappear. The leadwort appears later and fills in the space perfectly, both have flowers in shades of beautiful blue.

rhizomatous â€“noun Botany.
a rootlike subterranean stem, commonly horizontal in position, that usually produces roots below and sends up shoots progressively from the upper surface.

Questionably hardy north of zone 6, for me [zone 5b] it has done well in an area that gets dips into zone 4 temperatures. Officially hardy in USDA Zones 5-9, maybe like many plants it depends on having well drained soil or a bit of protection to survive cold winters.

Full sun to part-shade in loose, fertile, organic, well-drained soil suits it fine. Too wet and it rots.

Softwood cuttings can be rooted in spring. Divide rooted offshoot pieces of any time during growth. Easy to grow, there are many warnings about this plant being invasive, but I do not find it so in my cold climate clay soil conditions. Transplant in the spring, and try not to attempt to move the plant after midsummer, when the roots may dry out. Once settled it is drought tolerant. 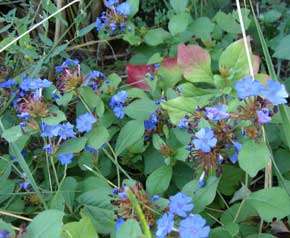 Was once believed to cure lead poisoning-perhaps because of the blue flower color, hence the namewort. “Plumbeus” is Latin for “lead colored”. Folk medicine uses Ceratostigma plumbaginoides (Plumbago, Leadwort) as a treatment for ringworm, made into a decoction and then applied in a salve.