Asters are one of the many daisy family members. Often called “Michaelmas Daisies” [although Aster novi-belgii is also called this nickname] since their autumn blooming coincides with the September 29th date of the Church calender celebration. Also known as New England Aster (Aster novae-angliae), they are widely available in named varieties ranging in color from pale pinks through deep purples.

The taxonomists have changed the genus name, and now asters are no longer “asters”, at least for those of new world origination. They are now called, ‘Symphyotrichum’. I bet stores will long be resistant to changing the pretty name ‘aster’ for the new one, though.

I’ve grown the New England asters for years, they now seed prolifically through my garden. I started out by buying some named varieties, ‘Harrington’s Pink’, ‘Alma Potschke’, and ‘Ballad’.

There are flowers enough in the summertime,
More flowers than I can remember.
But none with the purple, gold, and red
That dyes the flowers of September!
â€“Mary Howitt (1799â€“1888) This aster has rough medium green leaves in a lance shape of 1 to 2 inches growing along tall woody stems; hairy and clasping. It is a coarse looking plant, but the myriad flowers which cover the plant in early to mid autumn are dainty and a burst of pure color in the late garden. 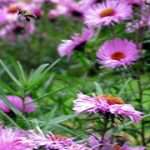 How To Grow Asters

Originating in Eastern North America, they are easily grown in Ohio and similar areas.

Spring is the best time to transplant and divide. If you have named varieties, divide them about every other year; replant the healthy portions in well-dug and enriched soil. Discard overly woody parts. It helps the plant to be pruned or tipped back in early summer, but no later than July 4th.

Pruning produces a bushier plant and more bloom, and also helps the plant from leaning over so much when weighed down by the burgeoning blooms in the fall rains.

Average soil suits it, so no special fertilizer- just whatever you commonly use in your garden during the bloom season. Feeding encourages good blooming.

Gertrude Jekyll recommended gardens set aside for showcasing certain seasons, of her own Michaelmas daisies she says “[they] have, as they well deserve to have, a garden to themselves… where the flowers are in glad spring-like profusion, when all else is on the verge of death and decay”. 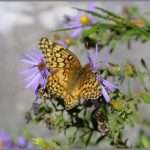 Asters are a talisman of love and a symbol of patience in flower-speak. Excellent cut flowers to tell someone you love them- they make perfect country bouquets.

Aster is Latin for star.

Placed on a grave they denote bravery.

It is said burning the leaves of the aster flower would keep snakes away.

The purple asters bloom in crowds
In every shady nook,
And ladiesâ€™ eardrops deck the banks
Of many a babbling brook.
-Elaine Goodale, Autumn It's time to widen your herb growing adventure with a few of the lesser known herbs. We all start...

Perhaps you are new to this site and haven't read my articles on making an herb garden, or perhaps...