Painting by John Constable reveals a shrubbery, large round flowerbed and border with roses. Set within a country estate, with plenty of room for such features.

The Victorian Age lasted over a long period and holds aÂ broadÂ evolution of style, but there are characteristics that stand out among Victorian gardens, just as there are in Victorian architecture and costume.

This was a time when plant exploration came into its own.

The middle class expanded with an accompanying barrage of tastemakers, opining on everything from manners to interior decoration, architecture styles to garden landscapes.

Ideas such as “a small city garden should be “dainty and neat” were common. Some of those who molded public opinion, through their writing and landscaping, were William Robinson, Gertrude Jekyll, Andrew Jackson Downing, and J.C. Loudon.

Opinions were dispensed by the very popular Lady’s magazines, and very detailed instructions became the map by which the newly imported colorful flowers were arranged in the yard.

Victorians embellished everything, and their gardens were no exception. Porches often hung with vines, trellises were attached to walls and vines grown upon them, and urns filled with greenery ad flowers were used liberally in the landscape.
The early “allotment”, or community garden.

Hillclose gardens, survivals of Victorian plots, give some insights into what was valued in a garden. Some were Kitchen gardens, others ornamental, many contained a restful garden house. Visit these gardens if you are ever in the Warwickshire part of England.

J.C. Loudon, an English author formulated the Gardenesque style, and Andrew Jackson Downing became an influencer through his popular books which outlined house plans and the way the exteriors and properties should appear. “Picturesque, Neoclassical, and Gardenesque” styles all became recognizable fashions in the landscape, as well as in architecture (which went hand in hand).

Today’s ideals of viewsheds might derive from some of the ideals of this design movement. Rev. W. Gilpin wrote inspirational essays and journals which gave rise to much of these ideals. Uvedale Price interpreted these for landscaping… “retain old trees, rutted paths, and textured slopes, rather than to sweep all these away”

When plant collecting came into its own during the Victorian age, this style developed to showcase specimens of the plants, and recognize the efforts of the gardener. Island beds became popular, along with small scale features from nature.

The first impression many have of Victorian gardening is created by scenes of bright, lowgrowing flowers planted in designs.Remembered both because it was so popular and because of the famous reactions against its excess. Dumping the style resulted in the type of gardens we like so well today: naturalistic and “painterly”.

It did not disappear altogether. carpet bedding is still used in public spaces, andÂ can be judiciously employed in today’s gardens, too.

What was ‘Bedding Out’?

“Bedding out” might be seen as an expansion of the parterre. “A parterre garden is a type of formal garden created by 16th Century French nursery designer Claude Mollet. Mollet based his design on the square boundaries and elaborate interior patterns of English knot gardens.”

It was expected to be viewed from an elevated place such as an upper story window.
Bedding out often took the geometric shapes and the massed color evident in parterres. Using bright annuals, bedding out shapes often were fanciful: heart shapes, crescents, and paisleys.

Lawns became important and were used for framing views, garden flowers, and as “play spaces” for lawn games. Think of ubiquitous pictures of badminton and croquet games on a summer afternoon.

Like the Victorian interiors, the garden was layered with a rich display of textures.

Rose gardens and perennial borders caught the public taste and developed into collections of full season interest. A growing middle class had both the means and time to create such gardens adjoining their houses.

Emily Dickinson was an admired gardener in her day. Read of the flowers she made famous in her poetry, in the post Victorian Flowers.

Island beds within lawn areas came into their own, with the usual geometric shapes supplemented by paisley and kidney shapes.

This was one of the most common features in gardens of all kinds. It remained a persistent
part of home landscapes well into today.

Diverse choices such as hydrangeas, lilacs, and roses, plums, cherries, grapes, currants, gooseberries, raspberries, strawberries, and apples were all popular plantings in these gardens.

The idea of bountiful produce from one’s garden grew hand and glove with ideas of planting purely for visual pleasure. These two desires often found separate “rooms” with the front yard acting as a parlor of decoration and taste, while the back yard retaining humbler designations including the fruit and vegetable patch, drying yard, and child’s play area.

Vanhoutte spirea, lilacs, mock orange, and snowball hydrangea were all popular choices of the time.

Fences were highly popular, outlining boundaries and ornamenting the garden at the same time. MadeÂ of metal, cast iron or wire, as well as wood:Â the proverbial picket fence. Additionally,Â mixtures of brick plinths and iron fences, dripping with roses, or vines and lined with shrubbery could be found in an small town.

The foundations of a house were not disguised with shrubs the way modern plantings often are. Porches were heavily draped with vines such as Dutchman’s pipe, honeysuckles, ivy, clematis, wisteria, or morning glories.

Growing annual or perennial vines on a trellis provided privacy for a front porch, shade and cooler spaces indoors, and adornment for a triple advantage- no wonder vines were such popular elements in the planting plans!

Trees and shrubs, including the newly introduced weeping and contorted forms of trees and shrubs, and varieties with unusual texture or color are all planted as specimens (planted singly to highlight them). Preferred shrubs are lilacs, mock orange, and snowball hydrangea. Trees or shrubs planted in multiples are usually along property lines in mixed hedges. 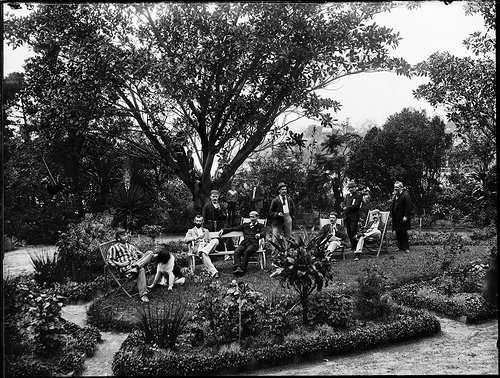 How might you interpret Victorian style for your own home and garden?

Rarely do people today want to have to fuss over trimming grass from around a myriad of pots and dots around the yard. We are largely our own gardeners.Which means weÂ must constrict the time and effort given toÂ landscape demands.

FollowingÂ are a few ways to give a Victorian feel to the landscaping, without the busyness and work that the original Victorians would have deemed fitting.

Victorians loved whimsical features such as topiary. Make topiary shrubs easily – the post Make a Topiary guides you through the process and recommends accessories for expert topiary.