Emily Dickinson is renowned as a poet with a unique expression that is fresh to even modern ears, but during her life in the Victorian age (she lived from December 10, 1830 to May 15, 1886) Dickinson was known more for her gardens (Judith Farr, The Gardens of Emily Dickinson

Emily was fascinated with flower language, the symbolic meanings given to many flowers, as were other Victorians. She used them as metaphor throughout her poetry.

But her gardens were very real, and her knowledge of them was intimate.

Martha Dickinson Bianchi, remembered “carpets of lily-of-the-valley and pansies, platoons of sweetpeas, hyacinths, enough in May to give all the bees of summer dyspepsia. There were ribbons of peony hedges and drifts of daffodils in season, marigolds to distractionâ€”-a butterfly utopia”.[90] In particular, Dickinson cultivated scented exotic flowers, writing that she “could inhabit the Spice Isles merely by crossing the dining room to the conservatory, where the plants hang in baskets”. Dickinson would often send her friends bunches of flowers with verses attached, but “they valued the posy more than the poetry”. -from the Wikipedia article 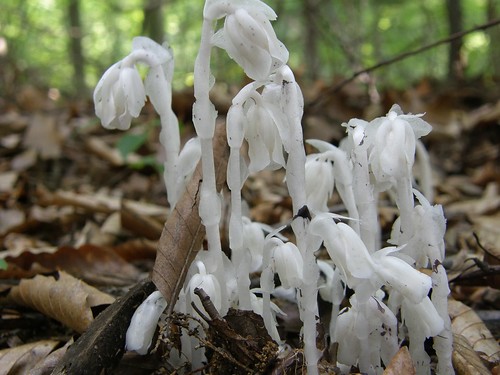 One interesting flower identified with her is the “Indian pipe”, Monotropa uniflora, perhaps because of a botanical painting sent to her by Mabel Loomis Todd which graced the cover of her first published collection of poems (edited by Todd) . This strange ghostly plant is a Mycotrophic wildflower. ‘Myco’ meaning fungus and ‘trophic’ meaning feeding, this type of plant is often parasitic, and the Indian pipe is one of that sort. It is native to the eastern regions of the USA, and grows in the deep leaf litter of forests. The plant is completely white with black flecks, and with its other name “Corpse plant” might be a good choice for including in a “Gothic” garden if the conditions were right. Blooming June to August at about 6 to 12 inches high, detailed information for this plant is found in this link for further reading.

“Carpets of lily of the valley”, as Convallaria majalis is a groundcover plant, were a common feature of Victorian gardens. it is a plant that grows well in partly shady spots and has delicate white bell flowers, blooming with a distinctive sweet fragrance in May.

“Ribbons of peonies” would have been rich with scent, and bursting with flower in that same May season.

Opulent double flowers were favorites of the time, and “Festiva maxima” is one old variety still loved and sold today- and might well have been part of Emily’s garden where she loved to let roses run “wild over defenseless peony bushes” in the words of her niece Martha.

Hyacinths were bulbs that could be easily forced indoors and this is one way Dickinson grew them. It is believed she grew them in a windowsill in her bedroom, like “a permanent Rainbow”. They have a pervasive fragrance and the old fashioned varieties are far more graceful and delicate in substance, if you can get them. HOW TO FORCE HYACINTHS: Chill the bulbsplace them in a refrigerator at 35 to 45Â° F of varieties best for forcing. Plant them in a pot with loose peaty soil, or use a bulb vase with water that barely touches the base of the bulb. I like to use pebbles and waterjust fill a sturdy bowl or container with clean pebbles,fill to surface with water, place bulbs in with water touching only the base of the bulb to force bulbs. Grow in a sunny, but cool, window. I’ve grown these recommended varieties:

Others are mentioned along with detailed information on forcing your bulbs from the North Carolina Cooperative Extension Service. More info on forcing bulbs She would have grown old fashioned roses like ‘Madame Hardy’

They embodied the idea of Beauty. Old fashioned roses are full, many petaled, and perfumed, Centifolias and Rugosas are among the old roses that are hardy, sweet, and perfect for bouquets. Dickinson mentions them in her poetry more than any other flower (44 times as noted by Domhnall Mitchell)
Mignonette, those timid looking but powerfully aromatic flowers that are now so hard to find. They are Reseda odorata, and should be sown directly into the garden after frost-free dates. They like alkaline soil and full sun. She combined them with “gilly flowers” (clove pinks), and sweet alyssum, as recorded in her letters to her cousins. This would make a very sweet floral bouquet in summer, very small blooms that are perfect for a nosegay.

I have long been a lunatic on bulbs

Emily Dickinson declared herself a Lunatic when it came to her love of flowers that grew from bulbs, lilies, crocus, fritillarias, hyacinths, and daffodils. Many a gardener can concur with this obsession.

Lilies of a “dark red hue” were sent to a “dark-eyed neighbor”.

Crocus, anemone, and snowdrops were beloved in the spring garden, their earliness creating a cheerful invocation to spring. Crocus were called â€œSpringâ€™s first convictionâ€.

I dared not meet the daffodils, For fear their yellow gown Would pierce me with a fashion So foreign to my own.

by Emily Dickinson, from I dreaded that first Robin, so, More of her Named Favorites

The retiring violet is the flower that Dickinson chose to represent herself in a photo where a clutch of violets are held in her hand, and her funeral bier was ringed in violets. This is one of the flowers that Victorians highly regarded, and no less for the symbolic connection with humility.

“The pansy, like the anemone, was a favorite of Emily Dickinson because it came up early, announcing the longed-for spring, and, as a type of bravery, could withstand cold and even an April snow flurry or two in her Amherst garden.” -from The Gardens Of Emily Dickinson

Pansies, especially the “Johnny-Jump-Up” are easy to grow, and you can either seed them directly into the garden soil or grow them earlier inside. they need light exposure to germinate. Leucanthemum vulgare Lam. oxeye daisy – Many states have listed this plant as a noxious weed, but Dickinson called herself “Daisy”, often, in her journals. A name chosen by her mentor Samuel Bowles, it was designated to mean “innocence’ in the Victorian language of flowers, but also “cheer”, “simplicity’, or “loyal love”.

The Unspoken Language of Fans & Flowers: With Recipes

To include daisies in today’s garden, there are many choice plants in the “Shasta daisy” group, Leucanthemum x superbum. From as tall as 48 inches (‘Becky’) to as small as 6 inches in height( ‘Little Princess’) there are choices for all sorts of designs; they all have the familiar daisy blooms.

They grow in regular garden conditions and like sun, they enjoy some feeding and well drained soil. Reputed to be deer resistant.

These are only a few of the flowers included in Emily Dickinson’s gardens, and represented within her poetry, perhaps it merits a continuation of the topic in the future? Do follow the links to continue your own discovery of what a keen Victorian gardener might have included in their garden. Why Dutch Tulips Are So Easy, And Why They Don’t Last

Tulips grown from bulbs raised in Holland are the easiest way for even 'brown thumb' gardeners to get fabulous spring garden color.Â Those big...

A few years ago, my husband brought home a molded pond kit that was on sale at the end of the season. That began my water gardening adventure. ... Or I should say about not planting tulips last fall. It never fails that when spring rolls around (especially after the type of deep freeze... Basic Tips On Decorating With Greenery Do you love real evergreen wreaths, garlands, and arrangements? I do, too. But unless you order from a...

Weeds, insects, disease, acts of nature, these all create gardening challenges. This year I faced...

Most recently, it was Meghan Markle who carried a bridal bouquet in the style of the Victorian...

Choosing Made Easy With This Evergreen Guide Which are the most popular? It depends on where you...