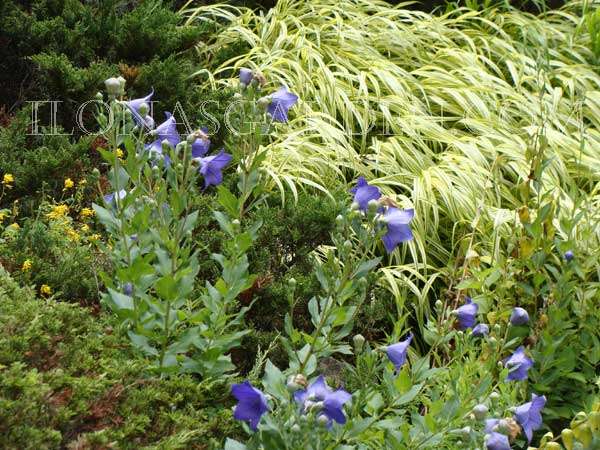 While color-themed gardens intrigue in the planning stages, they can be a bit difficult to pull off. One drawback is the self-limiting nature of it… there are so many plants that attract our attention and to reduce them to only one color is quite a task. Then, next, the color blue is not a common one in nature, perhaps as an offset to all that sky. Finally, there is the color itself. Colors have visual and emotional qualities, and what you believe the outcome may produce could well become something far different in reality. Blue is a cool, receding color, associated with calmness and sometimes sadness. In the garden setting this tendency to recede in our vision is accentuated. Blue flowers are sometimes lost unless they are very large or in a large grouping, such as tall spires of delphiniums or masses of blue flax. 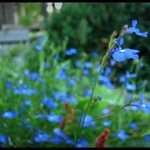 Gertrude Jekyll was one of the first to write of such color themes in detail. In her chapter of “Special Colouring” in “Gertrude Jekyl in her book, Colour Schemes for the Flower Garden

” she says of blue gardens:

“It is a curious thing that people will sometimes spoil some garden project for the sake of a word. For instance, a blue garden, for beauty’s sake may be hungering for a group of white Lilies, or for something of palest lemon-yellow, but it is not allowed to have it because it is called the blue garden and there must be no flowers in it but blue flowers. I can see no sense in this….”

large group of blue flowers within a garden

Well, there we have her opinion. What if it is something you wish to try? or whether you will take Jekyll’s good advice and add a color or two where you wish to make the whole picture more of a masterpiece than an experiment. Given that she sounded so discouraging, she does make a plan for a blue garden. And in it she makes an important distinction. In flowers there are a great many blues which are “purple-blues” like the Campanulas and the Lupines, which Jekyll excised from her blue garden plan – allowing only for “pure blues”. These are matched up with white and citron yellow, with glaucous, grey, and variegated foliage.

Glaucous foliage is a blue-tinged green color. It is bluish-green or silvery bluish-green from the effect of something called “the bloom”, waxy coating which can be rubbed off. “…having a frosted look from a powdery coating, as on plants; “glaucous stems”; “glaucous plums”; “glaucous grapes”

Keeping in mind that Gertrude Jekyll’s style was geared towards a full blown English border style, a more intimate space with perhaps a more modern approach might be suited to creating an all blue garden. 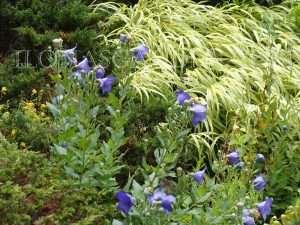 striking use of blue flowers and golden grass

Modern landscapes often use blocks of plants and color to make a design, or weave together several plants in a small space. A shady garden with glaucous foliages, anchored strongly by giant blue leaved hostas, and primarily using the purple blues could be just the calm sort of “Serenity garden” feel you are aiming for. Or a sunshine space with large numbers of just a few blue flowered plants interposed with grasses. I have a photo of such a space with a large group of blue platycodon paired with Japanese Hakonechloa macra ‘Aureola’ (Golden Variegated Hakonechloa).

I’ve grown most, but not all of these, Corydalis flexuosa for example. Don’t forget that many of the little bulbs of spring are a pure blue, like scillas. Any plant with “glauca” in the Latin name is a candidate for bluish foliage. If an all-blue garden is in your dreams, go for it.