The specie tulips have a charm all their own, with the small size, but tough constitution of plants that grow in the wild. Tulipa polychroma is an example of the delicacy of the flower and form of the species class. Grown in pots makes them easy to view and enjoy.

Tulipa polychroma is an example of the delicacy of the flower and form of the species class. Grown in pots makes them easy to view and enjoy.Source:Â hirsch

You might think you know this flowering bulb from Holland.

After planting lily-flowered, Darwin Hybrids, Early and Late types, Double and even Rembrandts, you may feel as though you have a good understanding of the world of tulips. But the specie types, those which are closest to the way most appear and grow in the wild, may be a new look for your spring garden.

We could call them “the original tulips”.

They can be naturalized, which means planted in a manner that mimics nature and maintains itself and multiplies. Low growing, there are many types that can grow in grassy areas. Like all those plants which grow from bulbs, the foliage must be allowed to continue until it withers on its own.

Wildflowers of the tulip family.

Tulips are divided up into fifteen groups (called Divisions) in horticulture.

This group of tulips is listed under the 15th Division. The many specie tulips are thrown together in the 15th group of tulip divisions. They may or may not be in commercial cultivation, and have a much smaller flower and size as a general rule. While they may have cultivars available, most do not.

Tulip Divison 15: Wild, AKA Botanical, Members of the Family

Origination, Use, and Cultivation

Botanical tulips or specie types are tulips as they appear in the wild, including both wild varieties and selections developed from them. Native to a very wide range as different as Southern Europe, Israel, North Africa, Anatolia, and Iran to the Northwest of China. [1]

The species group is suitable for naturalizing, which is a practice of leaving plants to themselves to multiply into a stand that looks as though it grows wild in nature.

Most of the botanicals are quite hardy, as far north as Zone 3 for many of them. These types of tulips are usually diminutive in size, and should be planted with other miniature growing companions in situations like a rock garden.

They can also be featured in containers or raised beds, where they benefit from close-up viewing. Peppermint Stick Variety Is One of the Most Popular

Tulipa clusiana is also called “The Peppermint Stick Tulip” and “The Lady Tulip”. It is a very old variety originally from Iran and Afghanistan. At least that is what was originally thought. It seems now to be placed as coming from Spain. Wherever its origination, it is a beautiful little thing with lots of history.

T. clusiana ‘Lady Jane’ is a selected variety, These species bloom midseason and are very slender and delicate looking, but sturdier than they appear.

Although I grew these species in a former residence, they seem to be very difficult to find nowadays. The Dutch growers are no longer producing many of these old lesser known types of tulips.

Tulipa Praestans Unicum is a striking tulip which gardeners will love. It has the added attraction of cream variegated foliage. It is the most tolerant of moisture in summer. (Still needing good drainage, but tolerant of rainy weather during the dormancy).

Also known as the Florentine tulip and native to the Mediterranean, Tulipa sylvestris in some places is considered a weed. Sometimes called the “woodland tulip”, it spreads by stolons which may become invasive.

Tulipa saxatilis species tulip is a rose-lilac color with a yellow center. This tulip dates back to 1825, which makes it ideal for heritage heirloom plantings. It is good for the south and naturalizes well. 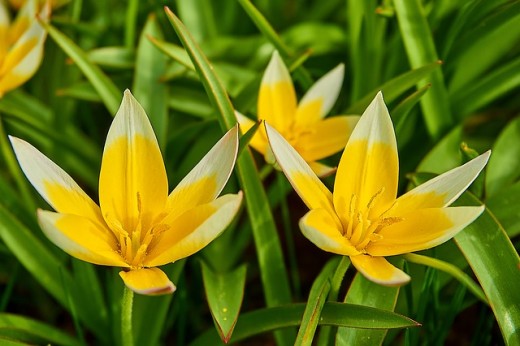 The golden yolk and pale yellow tips are the petal colors of this easy to grow flower.
|  Source: LMoonlight

Tulipa ‘Tarda’ is a little bloom with a bright “butter and eggs” personality.

Its April blossoms on short plants bring a spot of yellow and white into the spring garden. They remain closed on cloudy days, but respond to warmth and sun with a flat wide open bloom. This selection is hardy, and multiplies well.

Tulipa tarda has been cultivated in Holland since 1590.

Tulipa Violacea or Is It T. Humilis, or T. Pulcella?

Track down this unusually colored tulip by knowing that it has changed names more than once. “Tulip Pulchella Violacea”, T. humilis, T. pulchella has been around since 1860. An heirloom plant, it can be also found as named varieties: ‘Persian Pearl’ or “Black Base’.

Tulipa Violacea Pallida is also known as “Tulipa humilus ‘Alba Coerulea Oculata'”. It is a lowgrowing white tulip with a bluish eye.

This purplish-rose flowering bulb needs sun, is hardy, and blooms at the beginning of the spring season in March.

Tulipa ‘Violacea’ is called a “crocus-tulip” which clues you in to its stature and appearance. Like many of the species, it blooms early in the season.

Its native origins in Kurdistan indicate that it is hardy. This little tulip has a bright violet red color. 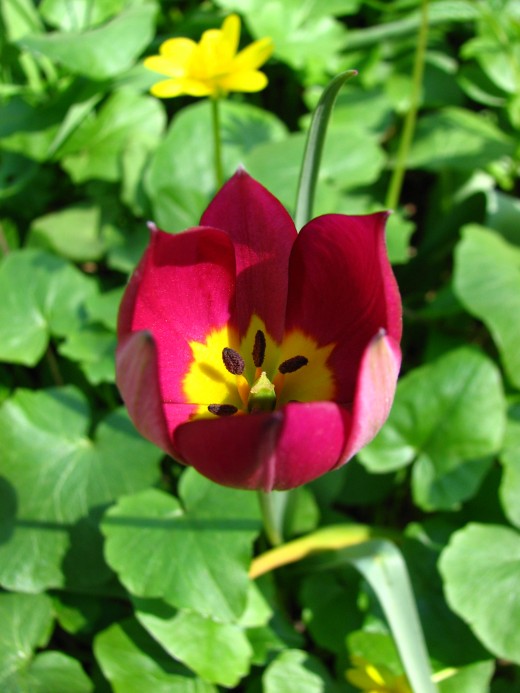 Tulipa hageri ‘Little Beauty’ is a pretty little tulip, a cherry red color with blue centers, it blooms in May in most gardens. Hardy and liking a sunny spot with a fairly dry summer dormancy, it will multiply when happy.

Little 4 inch tall tulip in a big color, “Little Beauty”. Brings the beautiful color that tulips are known for to containers, outdoor fairy gardens, rock gardens, and anywhere that you can view them up close.

This specie variety can be naturalized.

Tulipa hageri ‘Little Beauty’ is a good choice for southern states, which is unusual for tulips which normally require colder temperatures to bloom. Lilac Wonder tulip, Tulipa bakeri, is a very pretty pink and would be a nice addition to a fairy garden. It is a subspecies of T. saxatilis.

It is one of the most popular of the the botanical tulips group, for good reason. The wide and substantial flower makes a good impression considering the small size of the plant. 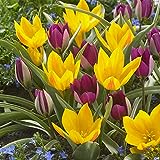 Specie Tulips are charming in the garden, but for vases, it is the Darwin Hybrids that hold court with their very large blooms and tall stems. If you wish to display the tiny flowers of the species, use very small vases and containers sized for violets or Convalleria.

Still, if you are making a small bouquet, such as a tussy-mussy, these little wild tulips would be charming. Larger flowered, short-stemmed blooms could be floated in a bowl, or secured into a base of Oasis.

Leaving plants to themselves to multiply into a stand that looks as though it grows wild in nature. These bulbs would look lovely if they liked their situation enough to naturalize.

Wildlings In The Spring Garden

Because these are desired for a more perennial planting, it makes sense to consider their growing conditions more carefully. When planting bulbs as annuals (the way we tend to grow the Dutch grown hybrids) it doesn’t matter whether we allow them enough sun or such matters. A guide to successfully growing specific species may be very helpful.

Another reason to purchase a book dedicated to them is the fact that most articles usually written about spring blooming plants are centered on those most commercially available and commonly grown. You may desire an more complete introduction to this class division once they capture your heart. Specie tulips are useful for heritage gardens, and many are known from the 1600s. Tulips: Species and Hybrids for the Gardener

Include Them In Your Fairy Garden

Picture some tiny Tulipa humilis ( read about them on this page) in a fairy garden. The pink color, low height, and miniature foliage would scale beautifully with other small plants and decorative items.

Ways To Use These Dainty Flowers Inevitably, as seasons change we see, and lust for, the color focus that picture perfect plantings of fall provide. In Autumn, without a doubt it is... The Minor Flowering Bulbs I Love Along with a few stories One of the first things I wrote about for this site centered on the small, or minor,... 20 Easy Perennials To Multiply By Division

If you need more perennial plants, but must curtail your budget, learning to multiply plants that thrive with division is the answer for you. Many...

Ornaments in the Garden: Bird Baths

Do You Have Room for a Bird Bath? A birdbath is more than a garden ornament, it is an important...

Some of my flower favorites are ephemerals- fleeting flowers that grace a garden and then...

Attract and Nurture Butterflies in a Sunny Garden

A circle of sunshine and flowers to attract a mob of butterflies is dream for many of us. We can...