Speak Softly: The Language of Flowers

by Ilona Erwin | about the flowers, garden tales 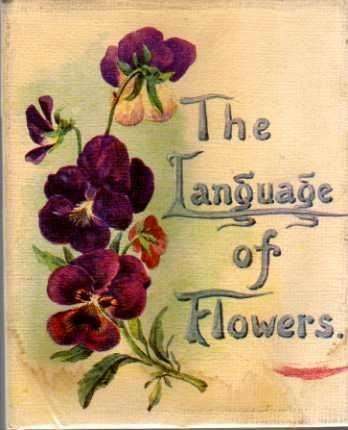 The language of flowers is a time honored tradition for wedding flowers. Tussie Mussies, those dainty old fashioned bouquets, were once a domain of theLanguage of Flowers

. Flower bouquets were used as an expression of emotions in not just events such as weddings or funerals, but in everyday exchanges.

In Victorian times the choice and arrangement of flowers became an intriguing way to use a symbolic code to relay silent messages. The origination of the Victorian enthusiasm for attribution of meaning to flowers began with Lady Mary Wortley Montague, wife of the British ambassador to Constantinople. Renewed interest has been stirred up with the recent royal marriage of Prince William and Kate Middleton, when she chose a bridal bouquet redolent with fragrance of lily of the valley and symbolic meaning, drawn from the pages of traditional language of flowers.

The press release from the Royal Palace:

“The bouquet is a shield-shaped wired bouquet of myrtle, lily-of-the-valley, sweet William and hyacinth. The bouquet was designed by Shane Connolly and draws on the traditions of flowers of significance for the Royal Family, the Middleton family and on the Language of Flowers”

What is the ‘Language of Flowers’?

Undoubtedly the idea is older than the known history of it, but our present idea of the symbolic language of flowers comes from the Victorian age. It was then that the tales of an earlier recollection of secret messages sent via bouquets of flowers took hold on the popular imagination.

What story was this?

The wife of the eighteenth century British Ambassador to Constantinople, Lady Mary Wortley Montague, took note of a curious custom in the harem, and wrote of it in letters back to England. The secret language of the harem women included many token items, besides flowers, but the idea of a secret code between lovers caught the imagination of Europeans. From France came the lists of flowers and their purported meanings, and by the middle of the nineteenth century the practice had reached a height.

It seems that a number of European fads in floriography flourished beginning in the seventeenth century: Sweden, after the return of Charles II of Sweden from his exile in Turkey, in France, and later in England. 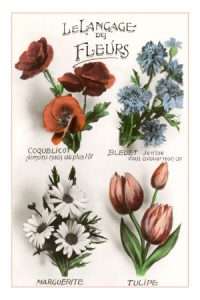 Adjusted for culture and custom, the meanings of flowers may vary, according to the source. There are some that remain perennial in meaning, and those are the ones most usually combined in modern flower arrangements for weddings and other occasions.

What are some of the more well-known flower meanings?

These are from one source, some other flower meanings may be found, here. Flower dictionaries were written to track the meanings of flowers, called floriography.

The pink carnation became the symbol of a mother’s undying love, and in 1907 was chosen by Ann Jarvis as the emblem of Mother’s Day

Forget-me-not…True love. Forget me not.

Lily of the Valley…Return of happiness.

Peach blossom…I am your captive.

Rose, white…I am worthy of you.

“Belladonna: In Italian, a beautiful lady; in English a deadly poison.” – Ambrose Bierce, The Devil’s Dictionary

Make Your Own Tussie Mussie Bouquet

More Meanings
Meanings from a book of 1885Â (and older), collated and extensive.

For those hallmark high points of our lives, which we often commemorate with flowers and symbolic meaning, weddings, funerals, important anniversaries and births, the language of flowers may add to our appreciation of the thoughts relayed. A bride may chose flowers meaningful to her, a family may wish to have a casket arrangement which holds meaning in their grief, and good wishes for the birth of a new baby may be incorporated into a bouquet of flowers.

Anytime we wish to add a shade of meaning to flowers we give to someone, we can consider the time honored meanings of the blooms we choose.

A thoughtful gesture: include a note explaining the flower meanings to share the symbolic thoughts with others.