What Is A Secret Garden?

Have you ever wanderedÂ upon the title of something and wondered just what it is? That came about for me long after I had read and re-read the child’s novelÂ by Frances Hodgson Burnett, The Secret Garden. As a gardener I began to want to createÂ my own.
The idea of a secret garden is so intriguing, it combines mystery and surprise and the idea of a place that is just for us, a hideaway. Who can resist that? 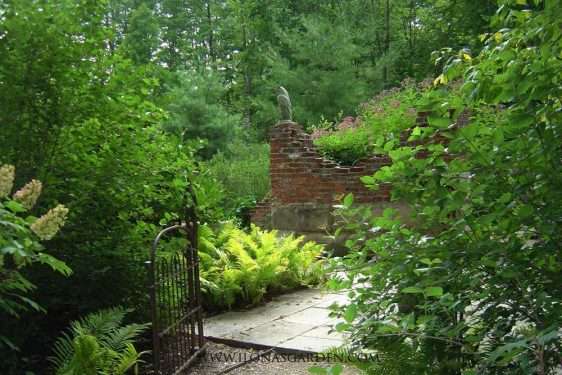 How would I go about creating a Secret Garden?

We often have an idea of what our secret garden should look like. Whether it comes from the pages of children’s literature, “The Secret Garden”, or a garden we’ve visited, we have an inkling of what sets it apart.
Taking a cue from one of my favorite childhood books, I have a few ideas on what would turn into a most charming feature in our yards.

In Columbus, Ohio,Â withinÂ a park that was formerly the private garden of two Innis Sisters, is a secret garden space. Following a side path, one’s attention is diverted to a small garden tucked within a ruin. Surrounded by bushes and trees, it is the perfect space for a quiet interlude …before other visitors arrive to discover its charm. Many of the photos for this post were taken in that place. 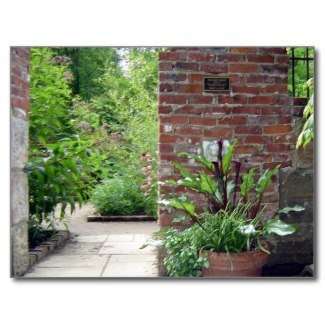 In the fictional pages of Hodgson’s book, the secret garden was locked away behind tall walls and doored gateway.

Within thisÂ sanctuary were plantings which awaited discovery and tending.

For us, what would create that sense of privacy, hidden access, and freedom to feel alone and be ourselves? This definesÂ what makes a secret garden for us.

If we have a large enough landscape plantingÂ trees and shrubbery to hide the inner garden from the eye is possible. WithÂ maturity that would also create a great deal of shade.

Most of us are unable to build the fine stone walls of English gardens, but we do have ready access to privacy fence. Tall shrubs would still be wanted for obscuring the view of the outside.

Being hidden, or at least partially hidden, is one necessity for the feeling of secrecy in the outdoor space.

An English style which partially provides privacyÂ is the sunken garden; I visited one at the Stan Hewitt estate years ago. Mostly viewed in photos, itÂ not a commonÂ featureÂ of Midwest American gardens.

Example of a Sunken Garden

This could be a design that isÂ utilized for a sense of mystery. Easily screened by a hedge, it is do-able in Midwest gardens.


The Element of Surprise

Related to screening from easy visibility is the idea of surprise. A gardened place that is unexpected.

Many landscapeÂ designs suggest a path that veers off mysteriously, to add intrigue and attraction to a plan.Â  AÂ secret spaceÂ takes that one step further. Not only is there a mysterious jog in the path, but the reward of a planted space, complete with bench, and perhaps a water feature awaits in a shielded area that encloses it from the outside world. That would be a welcome and lovely surprise!

Â AÂ Theme to Build Around

Maybe a place for meditation, or a color theme, and because of all the screening necessary on Â my flat terrain, this garden Â would certainly be partly shady.

Other landscapes given to this idea might be a hidden grotto or ravine area; at the bottom of a hill or the end of the lane, opposite the house. Anyplace veering off the usual path might be the beginnings of your private rendezvous.

A color theme, or literary theme such as a Shakespeare garden, why not? A bible walk, with favorite verses on signs to encourage reflection, ending in a prayer bench surrounded by fragrant flowers. Can you imagine it?

It Must Look Planted

To have the idea that it is a cared for garden, one that is well tended, there must be a sense of intensive planting. Not jostled, but enough of special selections to give a true invitation to take time in the enclosed destination. Otherwise what is to make it feel merely like a place to pass thorugh, or worse, a disappointment.

That is why I like the idea of a theme. a personal theme that reflects your own love and interest, a place that invites you and others to share in what you have created. Those are the best gardens whatever their purpose or placement.

Centered with a Focal Point 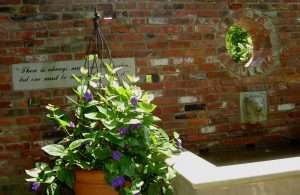 Taking a cue from the sunken gardens, I would like to see this type of garden centered with a tiny fountain, a plaque, a small statue or seat. Depending on how large the garden is made, the focus on some central element gives instant purpose and some intimacy. A Bistro set would be ideal in my imagined plan. Just two chairs and a small table, large enough to take coffee and have conversation with a friend, surrounded by a circle of fragrant annuals underneath sweet scented hedge of flowering shrubs or cool evergreens.

However, if you love the idea of a collection of statuary or repurposed garden art… that could be your own centered focus.

Because these types of features are so personal, their design and ornaments are unique to the garden maker. Only the qualities of mystery, destination, and intimacy are the common elements. Being walled off from other areas can take the form of actual walls, a fence, or a hedge, either sheared or natural. It can be a large garden or very small. The idea presented here is forÂ privacy. The delight of such a personal area is to find this secret roomÂ outdoors.