Warning: Cannot assign an empty string to a string offset in /home/customer/www/ilonasgarden.com/public_html/wp-includes/media.php on line 2204

I’ve grown to love these fleeting wildflowers of spring. You’d think that something so ephemeral, that disappears so early in the season, would find itself overlooked with the myriad choices of garden flowers available.
Yet, part of the charm is this seasonal appearance that so identifies it with time and place. Virginia bluebells won’t last long in their lush and succulent green growth and softly dreamlike blue and lavender pink blooms, but they will entrance you for the time they appear. They stay in bloom for up to three weeks or more. 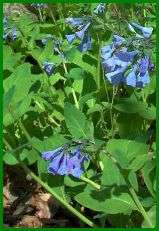 [The look] Flowers late spring to early summer with a bundle of trumpet flowers, in cyme form. The color transforms from blue pink through periwinkle blue to a soft sky blue. The overall effect is a heavenly blue color that is set off by leaves of clear green at first unfurl, giving way to a blue green. The leaves are large and oval shaped and the blooms have a drooping manner that gives grace to their appearance.
The plants are twelve to eighteen inches high and wide. For all its soft look and color, this plant has a presence in the spring garden.

Virginia Bluebells are an “ephemeral”, that is, they go dormant for summer, fall, and winter- appearing only in the spring. Mertensia virginica likes moist, rich soils. They don’t mind shady areas since they grow naturally in woodland and flower in the spring; hardy in zones 3-8, surviving temperatures as low as -24Â° Fahrenheit. Originating in the eastern woodland region of the United states it grows best under those conditions, including upland forests, wooded floodplains, wetlands and bluffs. Californians report a little trouble with it, and there are other ‘Mertensias’, but I don’t know of any that are reputed to be as garden worthy as this one.

Best left undisturbed to grow in colonies, but it can also be used in beds and borders. They are slow spreaders and easily contained.

[Propagation] Virginia bluebells grow from rhizomes, so the easiest way to propagate them is through division, I think. That is how I obtained my plantings. From a small start, once they had settled in and there was a large enough colony to divide, some divisions were dug and planted in a new area. Since Mertensia v. go dormant I waited until after flowering, but before the leaves disappeared.

[Fun Facts] In the Language of Flowers, bluebells represent constancy and solitude, sometimes humility. There are many blooms that go by the name “Bluebells”, due to their bell shaped blue flowers, but I think any one of them may used for this meaning.

Another name for Virgina Bluebells is “Virginia Cowslip“.
The flowers are pollinated by long-tongued bees. [Good Companions] Under shrubs, among hostas and ferns, I also like them with the perennial tulip, ‘Ivory Floradale’, or “Queen of Bartigons”. If you have an area of daffodils, I think bluebells would look lovely and naturalistic planted among them. If hostas are included, their late appearance will cover any bare spots left by the Virginia bluebells and the daffodils.

Follow the above links for more on Virginia Bluebells.

“A garden should be natural-seeming, with wild sections, including a large area of bluebells.” -Diana Wynne Jones, “Castle in the Air”