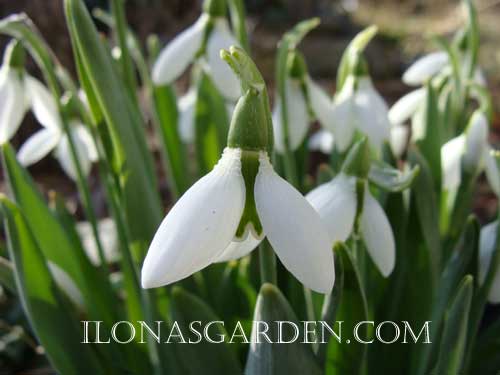 Though the crocus is more identified with early spring in our gardens in Ohio, the snowdrop is earlier to bloom. Its milky white (in Greek “gala” means milk,”anthos” means flower) and pristine blooms are one of the minor bulbs that can have big impact when large numbers are planted. They have a charm that makes them very desirable to grow in places where you are likely to see them from windows or as you pass by, while the weather is still chilly and inclement. Galanthus nivalis, the Snowdrop, is one of the premier minor bulbs for the spring garden.

One of the assets of the snowdrops is that fact that they last for a very long time in bloom, sometimes as long as a month. Their petals seem made of white wax and are sturdy enough to withstand the late snows, freezes, and winds of the March blasts as Spring enters and Winter curmudgeonly takes its leave.

There are several types of Galanthus which are gardenworthy, but the G. nivalis is commonly available and truthfully, unless looking close, there is not much difference between most of them. ‘Flore Pleno‘ is doubled, and Reginae-olgae blooms in fall; of the G. reginae-olgae it is said to bloom in “October under the plane trees of the Peloponnese in Greece”. How romantic, but not the conditions of the Midwest USA. Here, spring is the normal bloomtime for Galanthus, and there are many named varieties. (see Sarah Ravens article for a rundown of garden worthies)

Most of us are very happy with the generic ones sold everywhere in garden centers during the autumn. Those common types provide the most show for the money. It is a good thing for us, as some of the more pricey, named varieties could be hard to source in the USA. 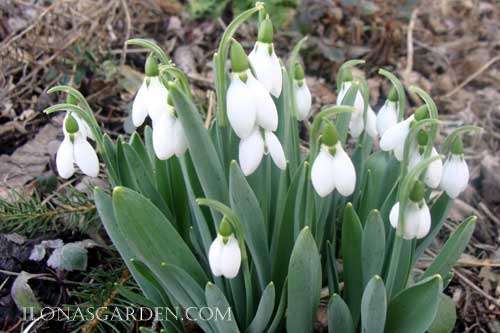 a clump of Galanthus nivalis

Description of a Snowdrop Plant

Medium green leaved, the whole plant seems succulently waxy with just a little glaucous or grayish-green bloom to them. Leaves are similar to Scilla with long straight shapes, the flower stems rising well above the foliage. The dainty milk white flowers drooping from strong but delicate looking stems. The flowers look like they have three petals, the form being three long outer tepalselements of the perianth, or outer part of a flower, which include the petals or sepals surrounding three small inner tepals. Some have jewel green markings.

Growing a Stand of Galanthus Nivalis

Snowdrops can be planted in both a cultivated and natural part of the garden; they grow in grass or under shrubs and trees, slowly multiplying by sidebulbs. The clumps can be lifted and divided like daffodils. Do not let them dry out, and plant them as soon as possible. Galanthus nivalis may also be grown from seed.

Bulbs should be planted at least 3″ deep.

Liking moisture, but well drained soil, they are perfect for woodland. I grow them in less ideal conditions, but after a settling-in period they liked the area beneath the Magnolia stellata and the Dogwood trees. One popped up in the grass, but you must, as with all spring flowering bulbs, allow the leaves time to mature and die. Bulbs can be naturalized when their leaves are allowed to grow into the summer and provide the nourishment the bulbs need for the next year’s flowers.

By July, at the latest, their yellowed foliage disappears as the plants go dormant for another year.

Snowdrops likely originated in the area of Caucasus mountains, in Turkey or Iran. Originally from shady woodlands near rivers and streams, where the soils are rich and moist, but well drained.

Reported hardy in zones 2 – 9.
Dappled shade, with a light mulch is favored. 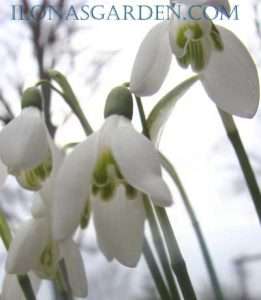 I like Snowdrops with white Hellebore niger blooming alongside, and the late arriving hostas to cover the spaces during the rest of the growing season. I think that the hellebore matches the clean white blooms of snowdrop, while contrasting in scale and shape. Both have a geometric regularity to their blooms, the snowdrop being very spare and delicate, while the Hellebore is full in its single rosebloom appearance with their color uniting them visually. The green and white harmony is accented with the yellow stamens of the Christmas rose, Hellebore niger.

Other small bulbs flower at a similar time, but I like the Snowdrops to be solo, with only a herbaceous plant like the Hellebore in proximity. Like other flowers of that opaque ethereal white, they don’t meld well. Their beauty is best set in its own quiet surrounding, not jostled with other shapes and colors.

I can hear some saying to themselves, “Oh, but white goes with anything!” and must answer that it appears not to be true in the spring flowers. White in spring holds a certain reserve, perhaps due to its proximity to the memory of winter’s snow. 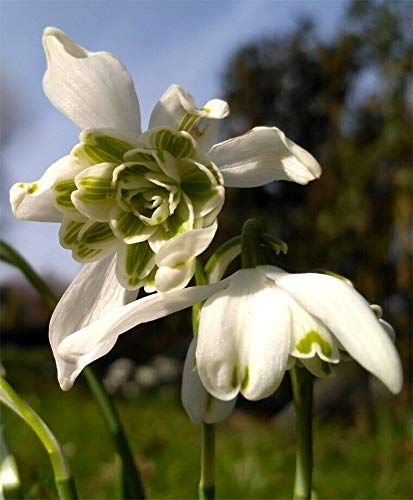 More About the Small Bulbs