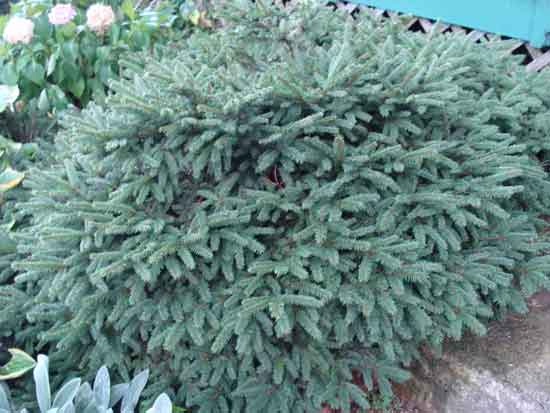 Many dwarf evergreens begin as mutations of some larger tree, and that is true of this popular foundation plant.

However they come about, the “Bird’s Nest Spruce” once started as the tall growing Norway spruce, of which I have a number on my property- they grow very well in the conditions here.

Good Reasons for Birds Nest Spruce in the Landscape

The color ranges from a dull medium to a dark green with bright spring green tips for new growth.

When young they have a dish like depression in the middle, and don’t grow quickly at first; over time they mound a bit.

The plantsÂ can suffer damage in the center from breakage due to snow weight or from attack by spider mites. Preventative care consists of brushing off the heavy snow with a broom in winter, or spraying the plants down with water in summer to discourage spider mites. 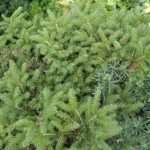 tucked in between some taxus

How to Grow a Bird’s Nest Spruce

We often group different evergreen shrubs together. A general rule is to allow plenty of space for each mature plant. This dwarf evergreenÂ grows slower than most of the Taxus shrub varieties, so pay attention to “spread” measurements in order to prevent overcrowding.

A “Witch’s Broom” is an abnormal, twiggy and unusually dense growth in an otherwise normal tree arising from overstimulated growing points. Plantsmen search for these unusual shapes and growth patterns, in the hopes of finding a useful sport with new qualities.

The Conifer Society has created a growth rate chart.

Another dwarf evergreen that might interest you: Hinoki cypress

Picea abies ‘Nidiformis’ [American Conifer Society]
Check the Photos at the end of perfunctory fact sheet.
Grown as a Bonsai