A pool of blue blooms, spritely heads of rosy pink or golden splashes of bee charmed cups… the world of minor bulbs can provide a touch of color or a naturalized bonanza of it.

There are more small bulbs than the usual crocus and snowdrops that are not so widely written about and planted. They can prove to be delightful, attractive additions to even very small spaces, and since they naturalize well, require little care. In fact some of the best care is to simply leave them alone long enough for their leaves to replenish the bulb’s resources for blooming the next year.

How To Grow These Choice Small Bulbs

Where To Grow This Group Of Five Minor Bulbs 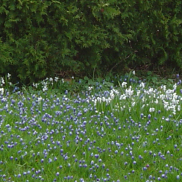 Where to Grow the Five?

Of all the five spring blooming smaller bulbs, Eranthis hyemalis likes most to be left alone. In moist earth, sheltered beneath trees and shrubs, they may well naturalize into large stands if left alone. They appear suddenly to carpet the earth where they have found a place they like, and then they disappear as suddenly. although their color would match a forsythia beautifully they bloom too early to coincide, and so matching them with Galanthus nivalis, the Snowdrops, and framing them against evergreen shrubs or under a tree or shrub creates an early spring/late winter vignette.

The windflower, Anemone blanda, appreciates sun and not too much disturbance, it will disappear if rooted around in too much (as in a perennial border), or when in competition for sun and moisture becomes too fierce (as in under a maple tree). However it will seed itself when happy, and naturalize within the competition of grasses. Upward facing cheerful blooms make a very pretty show for quite a long period in early spring.

One of the ways I like to combine these small bulbs is to have a garden with all blues, naturalized in the grassy areas and under trees. A mix of Scillas, Glory-of-the-snow, blue Muscari, are a melange of blue color spilled over the ground seeming to reflect the blue skies of spring. They make a nice background for daffodils scatter among them, too.

Anemone blanda looks best paired with tulips, and ‘White Splendour’ with ‘Red Emperor’ tulips are very striking. An early tulip, like the Emperors are important for concurrent bloom.

Eranthis hyemalis make a pool of golden yellow matched well with Snowdrops, but a bit off kilter with blue or pink flowers. Try matching up their bloom with a winter hazel shrub.

When most other spring bulbs are done, the Alliums appear to stretch the season into the summer full blooms. They combine well with Rue and other plants of the herb garden.

Fritillaria meleagris in moist meadow or at the verge of a moist wooded area accompanied by the ephemeral perennial plant Bleeding hearts (D. spectabilis) among ferns.

The Allium moly, Fritillaria meleagris, and Windflowers Â (Anemone blanda) are mentioned in this paragraph by the renowned William Robinson who changed the face of gardens in late Victorian times.

From the classic “The Wild Garden“, by William Robinson, in the chapter on “Ditches And Narrow Shady Lanes, Copses, Hedgerows, And Thickets”… He says,

“Among the families of plants that are suitable for the various positions enumerated at the head of this chapter may be named–Acanthus, any variety, Viola, both the sweet varieties and some of the large scentless kinds, the Periwinkle, Speedwells, Globe Flowers, Trilliums, Plume Ferns (Struthiopteris), and many other kinds,

the Lily of the Valley and its many varieties and allies, the Canadian Bloodwort, the Winter Greens (Pyrola), Solomon’s Seal, and allied exotic species, the May Apple, Orobus in variety, Narcissi, many, the Common Myrrh, the perennial Lupin, hardy common Lilies, the Snowflakes,

all kinds of Everlasting-Peas and allied plants, admirable for scrambling through low hedges and over bushes. 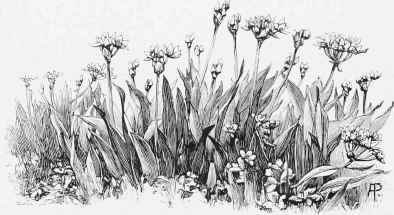 Windflowers, the taller and stronger kinds in lanes and hedgerows, the various Christmas Roses which will repay for shelter, the European kinds of Gladiolus, such as Segetum and Colvilli,

the taller and more vigorous Cranes Bills (Geranium), the Snake’s Head (Fritillaria) in variety, Strawberries of any variety or species, the beautiful Plume-leaved Giant Fennel, Dog’s Tooth Violets in bare spots or spots bare in spring, the Winter Aconite, the Barren Worts, for peaty spots or leaf soil, the May Flower,

for sandy poor soil under trees, the Dentaria, the coloured and showier forms of Primroses, Oxslips, Polyanthus, the hardy European Cyclamens in carefully chosen spots, Crocuses in places under branches and trees not bearing leaves in Spring, the yellow and pink Coronilla (C. montana and C. varia), the larger forms of Bindweed,

many of the taller and finer Harebells, Starworts (Aster), for hedgerows, and among the taller plants the Italian Cuckoo Pint (Arum), and also the Dragons, for warm sandy soils,

the Monkshoods which people fear in gardens and which do admirably in many positions ; the different species of Onion, also unwelcome in gardens, some of which are very beautiful, as, for example, the White Provence kind and the old yellow garden Allium (Moly). With the above almost exclusively exotic things and our own wild flowers and ferns beautiful colonies may be made.”